It is always good advice not to switch to a different DAW if you are comfortable and familiar with another one. And, if you aren’t getting the sound you want from the DAW, spend the time learning that DAW before considering switching. Even so, sometimes it’s worth looking at other DAWs if they have a ‘really want’ feature that yours doesn’t or to get ideas of other ways to do things in your current daw.

So I got a copy of Cubase 6 LE as a ‘freebie’ with another product I bought. I know it’s not the latest version of the software nor is it as feature rich as the ‘pro’ version but the midi score editing capability was enough to get me to try it. I also wanted to see the workflow and if the visual is any better than what I’m using. I even watched some tutorial videos so I wouldn’t be completely lost.

I’m not out to start a ‘my DAW is better than yours’ war’. If you like what you use, keep using it. Unless you’re just starting out, you have too much invested to change now.

In my opinion, the workflow of Cubase is more difficult than my current daw. There were a few midi features that were better but not enough reason to switch. The midi music notation editing feature that I most wanted to see was not good. I’ll take PG Music’s Band in a Box (or RealTracks) notation editor over this any day. (For the record, I use Sibelius 7 to create scores then export to midi or play the midi into my daw).

Not that I was seriously considering changing but I will definitely be sticking to my current DAW along with Komplete Ultimate. The DAW I use is the $60 full-featured DAW that even pro-tools professionals have switched to. That is Reaper.

So, Cubase users, any reason I should go back and take another look at it? What is it that made you decide on it rather than something else? Does the latest version have a better interface and workflow than 6?

UPDATE January 2016. Miroslav Philharmonik version 2 was released in December 2015. Based on the SampleTank 3 engine, the user interface is a thousand times better than the version reviewed below. I can actually use it without having to pull out the magnifer. There are new sounds and key-switching instruments are also provided. The instruments from Philharmonik 1 are also included in this program. The product is 64-bit. The mixing tab of the interface makes it possible to mix ‘in the instrument’ rather than having to mix everything in your DAW. If time permits I may do a full review. As to the Kontakt vs. Miroslav comments below, if you are into just orchestral music and don’t need to do sampling and creating your own instruments, pick Miroslav first, then Kontakt, although some of the add-on libraries available for Kontakt offer sounds and features not found in Miroslav, especially if you are involved in film or game music.

An older product, but it sounds just fine

This product, from IK Multimedia, is an older product that has been on the market for at least 4 years. But, I’ve only just now (Nov 2012) had a chance to use it. You could call it a classic. If you’re just getting into sound libraries and doing recordings or composing on a computer, this is a good library. 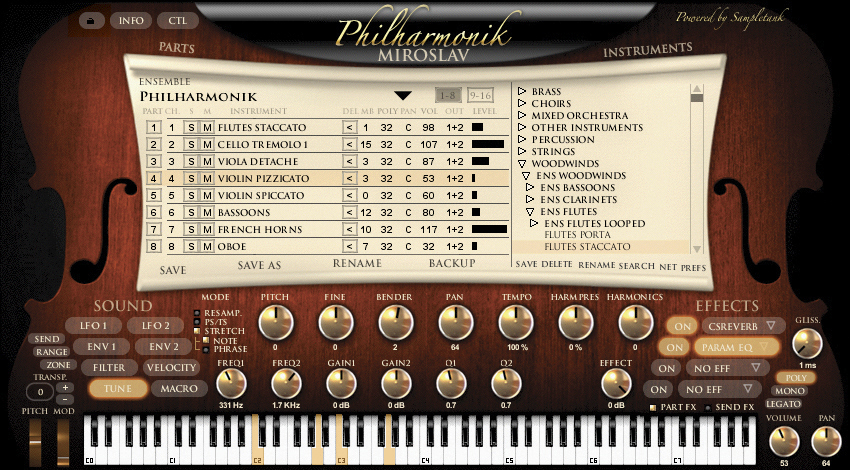 What is it? It is a sound library consisting of all the instruments in a typical classical orchestra. There around 8 Gigabytes of samples. There are various articulations of the different instruments, as applicable. For example, there is flutter tongue for the flute, pizzicato for the strings, legato and stacc. for all the instruments.

There are individual sounds for all the instruments in the woodwinds, brass, string and percussion families as well as some keyboard and harp sounds, including some nice organ sounds. In addition to the single patches, it comes with numerous presets that layer various instruments from different families. If that weren’t enough, there are single patches that contain a mixture of instruments. I believe there are over 3,000 presets.

The instruments are accessed via a stand-alone program or via VST, AU and I believe a few other plugin formats that I don’t use. There are 16 channels/slots that you can load instruments into. Each slot can be assigned to any channel and panning and volume can be set. There are combination presets that can save you the time of loading instruments on each track. Use your MIDI keyboard to play it (or use the mouse and play the on-screen keyboard or some of the keys on your computer keyboard work).

I use mainly the Kontakt factory library for my orchestral needs so that’s all I have to go on for a comparison. The big difference is that there seems to be more instruments and articulations and types of instruments in the Miroslav package. Unlike Kontakt, that uses key switching to switch between, say pizz. and legato, this uses separate patches. That can take a little getting use to. I do also use Session Strings Pro. I find the Miroslav to be a better sound overall than what I can get from Kontakt, but that’s not to say Kontakt isn’t good, just Miroslav better so far as the sound & variety of orchestra instruments. If I could only choose between Kontakt and Miroslav Philharmonik, Kontakt would win, but if you’re heavy into orchestral sounds, you might make the opposite choice. .

There are quite a bit of ways to modify the individual sounds. These include LFO’s, Envelopes, filters, velocity adjustments, keyboard range, many effects and effect sends, both individually and globally.

I’ve found the product to be stable and fine for use in Reaper, Win 7 64-bit version. Just be sure to set your midi controller to the correct channel, set the Reaper input to the controller AND arm the channel for recording.

The interface is very hard to see. The image above was downloaded from the IK Multimedia site. That image looks better than the actual program does. I’m using a 1920×1080 display and I can barely read the text. If I use the Windows magnifier to zoom in 200% it seems obvious that the graphics are not very hi-res. This makes it hard to learn the program. However, once you get use to it, it’s not a bad interface. It would have been nice if the manual told more about the presets, like which ones make extensive use of the mod wheel, expression control or other controllers. As with most any sound library I’ve ever used, the manuals barely cover the minimum and offer little in the way of practical usage. It’s sort of a ‘here are the sounds and how to load them, now you’re on your own.’ More tutorials and tips would be most welcome. Since it is an older program, it doesn’t support WASAPI sound support. I’d like to see it updated to a 64-bit plugin and the graphics improved.

Since I’m new to it, did I miss anything or do you have any comments about it?

Don’t forget, ALL of our sheet-music is now available at our website for FREE! I’ve uploaded a new video to YouTube. This is another with animated fractals. If anyone has questions about how I do the fractals, leave a comment and I’ll give the details.

The background music being used is my own composition. I wrote it specifically for this video. From other videos I’ve seen of similar content, I think what I did with the music is not what one would typically expect. I wanted something different. The music consists of a rhythm track that comes & goes in volume, two pad like tracks, one a bit eerie and finally a video game like lead/melody. I used Reaper DAW to do the mixing. I used the VST instruments Massive (2 different patches), Battery 3 and FM8. There is a lot of repetition. I welcome your comments on the music.

As a side note, if you’re looking for some music to listen to, please check out my albums on  Spotify, iTunes, Amazon These sites have all 5 albums I’ve released. GooglePlay also has singles not available elsewhere.

This video is now available on YouTube. In it we look at how to use the Reaper DAW (Digital Audio Workstation) along with VST software instruments and MIDI to record and produce a song.

This features VST instruments Plex2, FM8 and Massive. The piece is entirely done in MIDI. The video also looks at automation of both the VST parameters via MIDI controllers (CC) as well as Reaper’s built in automation.

A full tutorial on all of this would take several hours, but this is hopefully a good introduction to the subject. If you are interested in seeing more detailed videos on specific topics covered, comment on the video at YouTube or leave a comment here.

I decided to make an arrangement. I did it in Sibelius 7 and Reaper. The first video shows the process of making the arrangement. This arrangement was for violin, cello, piano, guitar, bass and drums.

The 2nd video shows taking the MIDI from Sibelius and putting it into Reaper DAW and making a recording.

I welcome your comments and questions, either here or on Youtube.

I posted a video showing some of the features of Session Strings Pro that is shipped with Komplete 8 Ultimate. (I’m not sure if it also ships with just Komplete 8).

The video should give you an idea of what is possible with the animator feature. The original material is basic block chords. Animator makes it into what you heard.

Any suggestions on other Komplete 8 products you’d like to hear some demos of, let me know and I’ll get something on YouTube.

Here’s another article about one of my YouTube videos. This video has a very rough piece of music in it using the Studio Drummer and Retro Machines from Kontakt 5 (part of Komplete 8 Ultimate) and Reaper. No processing was added. The sound is straight from Kontakt.

I loaded a midi file into reaper, added an instance of Kontakt 5 (as a folder). Under that folder I added two tracks, the midi import and the drum track. The drum track was created by dragging the grooves from Studio Drummer to Reaper. In Reaper I used a midi routing FX to route the midi drums from channel 1 to channel 2 as I had the retro machines on ch 1 and the drums on ch 2. The midi file was originally created as an export from Sibelius 6. I did no editing to any of the midi files (the song or the drums).