for those wanting to become musicans, or improve their musicianship 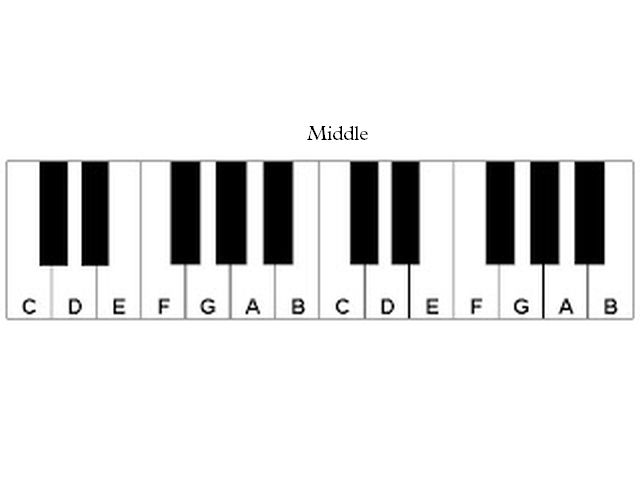 You may be thinking, ‘why a piano keyboard, I’m not a pianist.’ Knowing the layout of a keyboard can be helpful in figuring out some elements of music. This will make more sense later, but for now, be familiar with the look of a keyboard. Note the pattern of the black notes. Plus, there are plenty of times when being able to play notes on the piano, even with one finger, can be helpful. You will find that most good musicians know a little bit of piano. But, the reason I show it here is to point out the letters that are used in music. (Tip: To get a better view of the examples shown, click on them to view the full-size versions).

In music we only use the letters A through G. Once you get to G, you start repeating the letters. As you go forward in the alphabet, you go higher in pitch. For the technically minded, pitch refers to how many times a second a note vibrates. Let’s take string instruments as an example. You can’t see it, but when any string instrument is sounded, the string vibrates. The longer the string, the slower the vibration and the lower the sound. The shorter the string, the faster the vibration and the higher the sound. As you go backwards in the alphabet, the pitch gets lower, as you go forward, it gets higher. In notation, as the notes go toward the top of the page (higher), the pitch gets higher. As the notes go toward the bottom of the page (lower), the pitch gets lower. A good tip is to memorize the alphabet backwards from G to A. While we used the example of string instruments, all pitches vibrate, no matter the source.

This is a musical staff. It consists of 5 equally spaced lines. The distance between the lines is called a space. There are 4 spaces in the staff. We number the staff lines and spaces starting from the bottom up. Music is written on this staff. In order to specify a specific pitch, we use clefs. The two most common clefs are the Treble Clef (also called the ‘G-Clef’) and Bass Clef (also called the ‘F-Clef’). As the names imply, the Treble clef is for higher notes and the Bass clef is for lower notes. Depending on what instrument you play, you will use on or the other, but rarely both. Only keyboard and harp players, of the more common instruments, need to read both clefs. Even so, learning both clefs is a good thing to do. If you want to compose or arrange music for other instruments, you need to learn all the clefs.

Here are the Treble Clef and Bass Clefs. (Remember, click on the image to see a full-size version where you can read the letter names). Use the sayings shown to help memorize the notes. Remember the keyboard at the top with the one key marked ‘middle’? That is middle C. The first line in the treble clef is the E, two white notes higher than middle-C. The fifth (top) line of the bass clef is A, two white notes lower than middle-C.

Next time: More about basic notation

One reply on “Introduction to Music, Part 2 (Notation)”

This site uses Akismet to reduce spam. Learn how your comment data is processed.