for those wanting to become musicians, or improve their musicianship 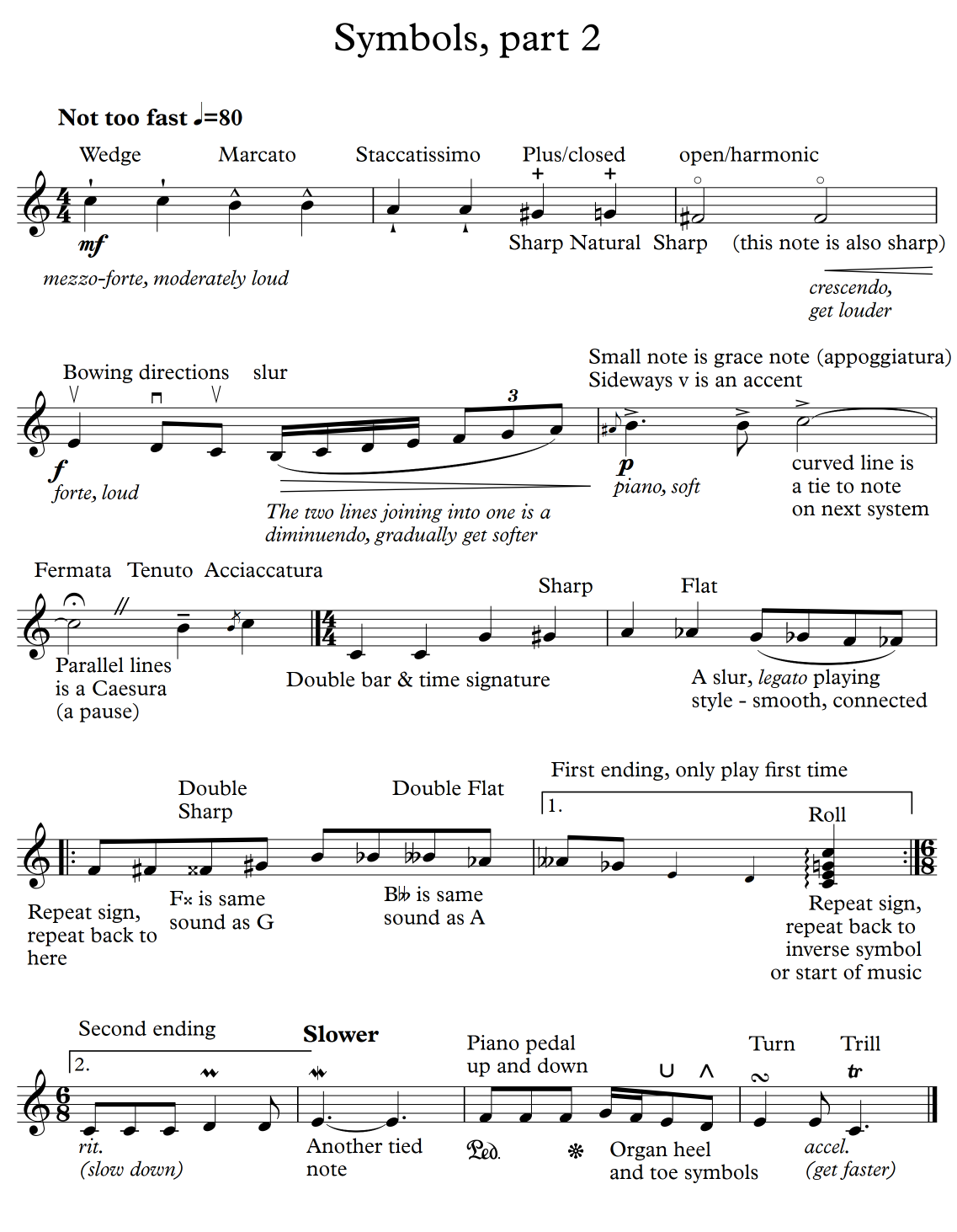 As we look into more symbols a reminder of how we will talk about symbols in this series. I divide symbols into a few categories: 1) Articulations; 2) Accidentals; 3) Dynamics; 4) Tempo or rhythm; 5) Ornamentations and 6) Directions. All of these are shown in the example.

Let’s start with some more Articulations. Take a look at the image (remember you can click on it to see a bigger picture):
Staccatissimo – a very short staccato
Marcato – play marked – emphasizing each note.
Bowing directions – String players only. The first means an up bow, the second a down bow.
Accent – play the note louder than normal, with emphasis.
Tenuto – hold the note for its full value, emphasizing the note’s length
Roll – or arpeggio. Keyboard, harp, guitar only. Play each of the notes one at a time in quick succession, usually holding down the notes when done on piano

These refer to variations in the pitch of a note. Remember the piano keyboard with its 2 black notes and 3 black notes pattern, each separated by two white notes along with white notes in between each black note? The distance from one key on the piano to another is known as a half-step. On a guitar, a half-step is one fret to another. When you go from the note C to the next key to the right, the black key, that is a half-step and the black note is called C-sharp, written C#. To go from D to the next key to the left, the note is now D-flat (written Db). Between B & C and E & F, no matter the instrument, it is always a half-step. On the piano, this is easy to see because there are two white keys right next to one another. An accidental lasts for the entire measure in which it appears. So in our example, the two F# in the last measure of the first line are both sharped.

In addition to sharps & flats, we can have double-sharps and double-flats. These simply raise the note another half-step. Yes, we could write F-double-sharp as G, but there are reasons why you don’t always want to do that. That’s for a later section. We also have something called a natural sign. This cancels any accidental and makes it just the letter name, no flat or sharp. On a piano, a natural note is always a white note.

These refer to how loud or how soft a note is. From softest to loudest they are:
pp; p; mp; mf; f; ff. Pianissimo; Piano; Mezzo-Piano; Mezzo-Forte; Forte; Fortissimo. You can add a 3, 4 or more p’s or f’s to make the sound softer or louder, respectively. There are also symbols, as shown, to indicate gradual changes in dynamics. The crescendo and diminuendo symbols are somtimes written out and abbreviated, cresc. and dim.

Tempo
The tempo marking is indicated above the time signature at the start of a piece of music and whenever a composer wants to change the speed. In the example here, there is a tempo marking at the very beginning of the piece of music and another in the 3rd measure from the end. The 1/4 = 80 is a Metronome indicator. It means that there are to be 80 quarter notes per minute. Notice the ‘rit.’ and ‘accel.’ text at the last line. These are the most common indicators for slowing down and speeding up, respectively, that one will find in music.

Ornamentations
Ornaments are indications to the performer to embellish the given note. The squiggly line is a mordent, the one with the vertical line through it is an inverted mordent. A mordent is typically played, in this example, as a 1/32 D, 1/32 E then back to the original D for the remainder of that beat. A trill (tr) indicates to alternate rapidly (usually 1/16 or 1/32 notes) between the given note and the next note higher, keeping in mind the key signature. In some style periods, you might start the trill on the note above. In some situations, a flat or sharp sign appears after the trill. That indicates to flatten or sharp the trilled note as indicated. A complete discussion of ornamentations could fill an entire book.

Directions
The repeat sign indicates, in this example, to go back to the beginning of that line. If there was no forward repeat sign at the beginning of the line, then one would repeat back to the 1st measure. There are other direction indicators that tell the performer to jump back to a specific symbol (DS), others that indicate to jump back to the beginning (DC) and play to the word ‘Fine’ (pronounced ‘fee-nay’). There can also be jumps to measures near the end, a Coda. We’ll show examples of other direction indicators in future articles.

Next time: An introduction to intervals and chords

This site uses Akismet to reduce spam. Learn how your comment data is processed.